You are here: Home / Articles / A Big Bang for Big Soil

Part 2 of The Cosmos, the Earth, and Your Health – The Story of Soil

[This is the second in a series of articles about how soil is formed and its link to health and nutrition.]

Where does soil come from? In keeping with the big-picture perspective of this series, let’s tackle that question from the god’s-eye perspective. We can zero in on the finer points later.

The minerals and other matter in soil have been around since the Big Bang and shortly thereafter. How and where those elements were formed is important. That dictates to a large extent their properties: what they can do, what they bond with, whether they are solid or liquid, metal or non-metallic, conductive, magnetic, reactive, inert, important in life’s processes or not and just how so. And that in turn, largely determines how an element behaves in soil, in plants, and in your body. So I’m not beginning at the very beginning just to be psychedelically cosmic; it’s a crucial part of the soil story.

All the chemical elements except an evanescent handful of human-made ones were forged in one of three long-ago settings. The lightest elements, beginning with hydrogen, appeared in first few micro-moments of the Big Bang. A set of middleweight elements were fused later in the interior of early stars, and the heavier atoms were smashed together from lighter ones in massive stellar explosions called supernovae.

The scheme posed by most current models of the early universe goes like this: Roughly 13.8 billion years ago the universe was infinitely dense matter at an infinitely high temperature in a state called the singularity, in which the laws of physics as we know them didn’t exist. Time, distance, velocity, light, gravity—none of these existed. I don’t think the human mind can conceive of what this was like. As you can imagine, this state isn’t exactly stable, and everything everywhere exploded and expanded. In the first few seconds of its existence, our universe went through myriad, utterly transformative shifts in which its fundamental properties repeatedly altered, as if someone were madly and completely rewriting the laws of physics many times a second.

The earliest describable state of our universe was something called the quark-gluon plasma. Quarks are among the smallest and most basic particles known. The subunits of the atom, such as protons and neutrons, are made of quarks. Gluons can be thought of as glue-like entities that bind quarks together into the atomic subunits. But temperatures and densities in that early stage were so unimaginably high that no stable atomic particles could form. Any nascent protons or other multi-quark particles that arose were instantly torn apart and annihilated by the immense energies blasting them, as if a cosmic blowtorch were stripping apart the fabric of the universe. This quark–gluon plasma lasted only a few microseconds, but because all matter at that time was moving at so-called relativistic speeds—a substantial fraction of the speed of light—a few milliseconds was a vast expanse of time. The temperature of this particle soup was about 100 billion degrees Centigrade and it was about four billion times more dense than water. Those numbers are not really comprehensible; there’s nothing to compare them to. During these few microseconds, the laws of physics—the elemental constants and properties of the universe such as gravity and the second law of thermodynamics—began to settle down into the ones that rule all events today. It’s mere chance that we have the natural laws that we do. If the events of those first few micro-moments had broken slightly differently, this would be a completely different universe, where pi was perhaps equal to 10, or was constantly changing.

This rapidly expanding universe cooled quickly. At roughly one millionth of a second into the Big Bang, temperatures had dropped enough—to about a billion degrees—for quarks to condense into the first stable protons and neutrons, much the way cooling steam condenses into droplets of water. But the universe still raged with enough energy to continually rip apart these particles, so protons, neutrons, and other sub-atomic particles came and went in dizzyingly unstable fashion.

A very long time later, when the universe was all of ten seconds old, temperatures had cooled to where particles were no longer being blasted apart as fast as they came together, and the first true elements formed. These were hydrogen and helium. Hydrogen is made of just two particles: a single proton circled by a lone electron. Helium is a nucleus of two protons and two neutrons orbited by two electrons. These two elements, the lightest there are, make up 98% of the matter in the universe. Occasionally two atoms of helium would smack together in the cosmic forge, creating tiny amounts of the next-lightest elements, lithium and beryllium. Those four elements—but mostly hydrogen and helium—were all there was.

By the time the universe was 20 minutes old, continuing expansion and cooling brought this era of nucleosynthesis to an end. Energy was now too diffuse to smash particles together, and new matter stopped forming for quite some time. For about 200 million years, the universe must have been very boring: nothing but an undifferentiated, featureless cloud of helium and hydrogen in their various isotopes, slowly swirling.

But all that hydrogen and helium was doing something very important. In some places, matter randomly drifted into slightly more dense patches, forming vast ripples. Gravity accelerated this process of accretion, tugging the atoms and particles in these titanic ripples toward each other, compressing and heating them. If these gas ripples were big enough—thousands to millions of times the mass of our sun—they went through something called gravitational collapse, crunching down more and more densely, and then shattering into huge rotating chunks, each as massive as a large star. As they spun and continued to collapse, the heat and density of these proto-stars became so immense that they ignited into giant nuclear fusion reactors. These, the first stars, appeared roughly 100 to 200 million years after the Big Bang. Under their hellish conditions, hydrogen, helium, and subatomic particles in the stellar cores were smashed together into novel, heavier elements.

This new way of forging atomic nuclei, called stellar nucleosynthesis, populated our universe with an array of elements, opening huge realms of possibilities for novelty. This boost in diversity fed an explosion in the ways that matter could combine. Suddenly a whole lot more could happen in the universe.

Elements birthed within stars include lithium, carbon, nitrogen, oxygen, sodium, magnesium, aluminum, silicon, phosphorus, sulfur, potassium, calcium, manganese, iron, copper, zinc, and several more. See Figure 1 for the complete list. As you can see, many of the elements essential for life are created inside stars. Now we had carbon, the backbone of all living things, as well as the classic fertilizer elements nitrogen, phosphorus, and potassium. Calcium and magnesium were on stage, as were several major trace elements. Many of the basic building blocks of life were built inside these stellar furnaces.

Figure 1: Where were the elements formed? 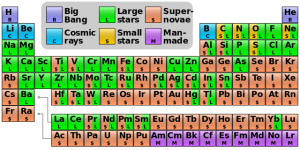 The periodic table of the elements. The small letter inside each box tells where that element was formed. Attribution: By Cmglee (Own work) [CC BY-SA 3.0]

The next stage in our story was a happy stacking of functions that helped make life possible. Although those life-friendly elements now existed, they were locked deep inside stars, which is not the optimal place for life and other complex systems as we know them to arise. How did the elements escape stellar cores and end up in places where life could form? The answer is, by some of the most violent acts in the universe. Many early stars were giants, hundreds or thousands of times the mass of our sun. Stars that huge are often unstable and have short lifetimes compared to smaller stars, as little as a few million years. Their most common fate is to collapse and then explode into supernovae, blasting their contents into space. And, to add to the useful functions of supernovae, as stars explode, their temperatures and pressures surge high enough to fuse their constituents into a new set of heavy elements. These include cobalt, nickel, molybdenum, iodine, gold, lead, and many more. These can’t form at the energy levels found in stars; they need the mind-boggling conditions found in supernovae. One supernova can emit as much energy as all the stars of a typical galaxy. Supernovae, destructive as they are, play a critical role in making life possible in this universe. They build new elements, and, by strewing their contents over light-years, put these and many other elements into play.

At that point, the actors in the theater of life and soil are in costume and waiting to go on stage. In the next installment, we’ll look at who these actors are, what they do, and why their synergizing roles let them put on such a great show. We’ll also see how the stage and scenery of the story of soil was built—in other words, how life came to be, why it was nearly inevitable that life arose, and how soil in many ways re-creates the conditions under which life formed.

I’ll do my best to make this an entertaining story, and one that could help you become a better gardener and permaculture designer, not to mention healthier and more prepared for an uncertain future. If you have friends who might like to hear it too, please send them this link for subscribing to our newsletter: http://eepurl.com/bv-apD