You are here: Home / Articles / The Cosmos, the Earth, and Your Health: The Story of Soil

“Give me a place to stand and a lever long enough, and I will move the world.”

With these words, the ancient Greek philosopher Archimedes taught us the power of leverage points. It’s a key concept in permaculture design, too. When we deeply understand the system we’re working with—be it a garden, a business, a community, or even a personal relationship—we can spot the places where a small, perfectly located nudge will beget a large response. Plenty of disciplines use leverage points. There’s aikido, where a tiny movement by a master redirects the force of an attacker to send the latter sprawling—or worse. In integrated pest management (IPM), the timely deploying of an insect trap at a vulnerable moment in a pest’s life cycle will snare only the target insect while leaving beneficial bugs. Finding leverage points usually requires keen observation and a deep grasp of the system we’re working with.

The leverage point I want to focus in this and the next few articles is soil. Soil, that thin living skin of the earth, is the foundation of life. When we use or create healthy soil, a broad gamut of benefits bursts forth: Rich soil sequesters carbon and promotes biodiversity both above and below ground. It grows healthy plants—which in turn grow healthy people and animals. Good soil stores water, reduces erosion, prevents runoff, and stores and exchanges nutrients. It does lots more; the benefits go on and on.

I learned the value of good soil the hard way, as a novice permaculturist working a hillside site in Oregon twenty-odd years ago. It had been clearcut and not replanted for years. The thin forest soil had washed downslope, leaving behind lifeless red clay. The previous owners had built a garden and added compost, but they had also dumped countless buckets of ash from their wood stove on the beds for a decade or so. That had cooked the soil into a brutally alkaline stew, and overloaded it with a toxic burden of potassium. (That last word derives from pot ash, named for its abundance in the residue from ceramic kilns. Potassium is a critical nutrient, but in excess it blocks the uptake of several other nutrients.)

Restoring our abused soil taught me a lot, and I’ll detail that story a bit later. After a decade at that site, and ten years of studying, remediating, and rebuilding that depleted soil, we moved north to Portland. Our city lot turned out to be Willamette Valley loam, some of the finest agricultural soil in the world. Plants fairly exploded out of the ground, easily double the size and growth rate of those in our previous place, even after all my restoration efforts. Those combined experiences taught me precisely why farmers value good soil. It’s a lot easier to find it (and preserve it) than to build it.

We’re going to cover a lot of ground—if you’ll pardon the pun—in this series of articles. My approach will be different from the way most books and videos teach about soil. I’ll begin with an overview of what soil is made of, and then zoom out for the cosmically big picture of how the elements in soil—carbon, nitrogen, phosphorus, the trace elements, and so forth—are fused together in stellar infernos. That grand story isn’t just an excuse for me to do some cosmic raving. It gives us clues to why these soil constituents are so good at what they do, and we’ll cover that subject next. Once we’ve got all the theory and background, we’ll get practical: how nutrients are held and exchanged in soil and in the critters who live there; words of wisdom and advice from some of the masters of soil science and nutrient-dense gardening; how to tune up your own soil; and finally, my own time-tested method of creating gorgeous garden soil and my recipe for the super, growth-boosting blend of soil amendments that I use to raise lush, nutrient-dense vegetables.

First, what’s in soil? The pie chart below shows the make-up of a typical agricultural soil. 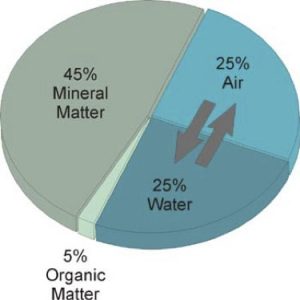 The components of a typical soil. Image credit: University of British Columbia.

In soil, the amount of air, water, and organic matter (which in the chart includes soil organisms as well as dead organic matter) can vary tremendously depending on how the land has been used, when it last rained, the climate, and so forth. But the pie-chart’s numbers are reasonable averages. In these articles I’m going to focus on the organic and mineral parts of soil. “Organic” in this case means that it is or once was a living thing. The word comes from the Greek organikos, meaning “pertaining to an organ of a living being.” From a chemical point of view, organisms (also from the same root) and organic matter are mostly carbon. We’ll need to spend some time on this miraculous element and how it works so we can understand why soil organic matter is so critical to healthy soil and healthy people. The word “mineral” is a catch-all for stuff that originally came from rocks. It includes sand, silt, clay, and the elements that make them up, such as aluminum, calcium, magnesium, and a big chunk of the rest of chemistry’s periodic table. Minerals and carbon are soil’s main active ingredients.

Where do those soil ingredients come from? Carl Sagan famously said that “We are made of star stuff,” and that’s true of soil, too. Just about everything in soil was birthed in stellar furnaces or in the first few micro-moments of the Big Bang. To give proper credit, Sagan was not the first say that we’re built of “star stuff.” A journalist in a 1913 newspaper has priority, having written, “The sun is made of star stuff, and the earth is made of the same material.” In 1918 the astronomer Albert D. Watson applied the phrase to humans, writing, “. . . we come to see that if our bodies are made of star-stuff . . . we are made of universal and divine ingredients.”[1]

I’ll leave you with the notion that soil has a history as old and as grand as our entire universe. In the next installment, I’ll describe the hellishly hot origins of soil elements and the special qualities that make them the basic building blocks of life and health.

This soil series should be a fun, educational, and useful journey. If you have friends who might like to come along with us, please send them the link for subscribing to our newsletter. Here’s the link for the newsletter mailing list: http://eepurl.com/bv-apD .